MEMS is the abbreviation for Micro Electro Mechanical Systems. These can be components like micro sensors or micro motors, but also micro sensors or micro measurement devices. The special adventage of this technology is, that mechanical parts as well as electronic circuits can be manufactured from the same material and in the same substrate, which is usually silicon .
Silicon wafers are already used for long time as a material for the production of integrated circuits. Meanwhile it became possible to integrate mechanical and moving parts as well as membranes, measurement pins or other structures directly into the silicon, which serves also as a substrate for the electronic compounds. This could be achieved mainly by improved methods for etching and texturing of silicon wafers and bond technology for connecting two silicon wafers. The advantage is predictable: Very small mechanical parts can be produced including their electrical control or evaluation system.
Basically, the same machines and the same equipment are used for its production, that is also used for manufacturing semiconductor circuits. However the specifications and requirements are less strict, minimum resolution and smallest line width are larger compared to needs in the semiconductor industry. Furthermore such MEMS parts are often producted in small production volume, which requires the dedication of flexible, small and cost effective equipment. Quite often even equipment with manual loading is requested. Manufacturing equipment can therefore be designed more simple and cheaper, which helps to reduce the investment budget of a MEMS factory and allows then also smaller companies to enter this market. This circumstances lead in the past years to a strong increase of new companies, manufacturing parts or sensors in MEMS-technology.
Many manufacturers of semiconductor equipment adapted meanwhile to this trend and offer now equipment, customized for MEMS production. In this article we explain some examples of machines, that can be used for manufacturing MEMS components.

For texturing layers, equipment is necessary for coating the wafers with photosensitive resist, hardening the resist, illuminating the resist, and to develop the resist. Then the main process step, etching or deposition mainly, follows. Finally the resist has to be removed again. This is similar to standard semiconductor processes, just that the minimum resolution is lower usually.
Deposition, development and removal of the photo resist can be done by spinning machines. A dispensing unit is flowing the resist or developer or the solvent for removing the resist on the spinning wafer. Caused by the rotation, the material is distributed homogeniously over the wafer surface. Excessive material is centrifuged off the wafer. Such spin coaters are manufactured e.g. by Zeus. Small manually loaded versions are available, but also fully automatic systems.

The core part of each lithographic process is always the illumination system. It has to transfer the structures into the resist with sufficient resolution. In semiconductor manufacturing technology, in many cases high resolution steppers are used, which are unfortunately rather expensive. For MEMS manufacturing usually line width below 1 µm is not necessary; investment cost for the illumination system is more important. Therefore steppers are replaced by mask aligners in most cases. A mask is positioned between the light source optics and the wafer. This mask can be pressed directly on the wafer in the so called contact printing mode or it can be kept in a closed distance, called proximity printing mode. Mask aligner offer a very nice price performance ratio. Maschines for contact printing are available at rather low price already. Manual and automatic loading are both possible.

For the removal or stripping of the resist after processing, not only wet chemistry can be used, but also so called dry etching or ashing. A plasma etcher or plasma asher is used to burn off the resist in an oxygen plasma. The company of SNTEK is a manufacturer of competitive ashers with manual of fully automatic loading.

Texturing MEMS components is mainly done by etching quite often by plasma etching or dry etching. In a low pressure chamber a plasma is generated which contains highly reactive chlorous or fluorous radicals. These radicals are accelerated towards the silicon wafer, where they react with silicon and volatile compounds are generated. Material is removed. For manufacturing mechanical structures in a MEMS compound it is often necessary to etch deep trenches. The company of SNTEK is manufacturing such plasma etchers, which can etch also deep trenches. Models for manual and automatic loading cassette to cassette are available.

For building electro mechanical micro system, it is also necessary to deposit conductive or dielectric layers. Common layers are poly-silicon, silicon oxide or silicon nitride. It is necessary to control the tension in the layers, which is generated by different lattice constants of substrate and deposited layer.
Deposition can be achieved by plasma enhanced chemical vapor depostion PECVD from the gas phase. Using very reactive moleculs from the plasma, the deposition temperature can be kept rather low. PECVD equipment looks similar to plasma etching equipment.
Alternatively low pressure chemical vapor depostion LPCVD can be used, where the reaction is driven thermally by high temperature instead of using a plasma. Equipment for this process is called LPCVD furnace. The high temperature is a handicap for some products, but results on the other hand in more homogenious layers. A manufacturer of such LPCVD furnaces is the company of Koyo Thermo Systems. Small furnaces for a capacity of 25 wafers and manual loading are available as well as equipment with medium capacity or fully automatic systems for mass production.

For the formation of oxid layers, a simple oxidation furnace can be used also. In this case the oxide is not deposited but generated from the oxidation of silicon substrate material.

For the generation of inner structures it can be very helpful, if two or several wafers can be combined after texturing. This process is called bonding. If the surface of two wafers is very flat, then during contacting, many bondings are generated between the surface atoms of both wafers, the more, the flater the surface is. By annealing in a furnace or oven, the bonding strenght can be improved further.
Pre-condition for effective bonding is a very flat surface. It can be achieve by chemical-mechanical polishing CMP technology. The company of Alpsitec is a manufacturer of such CMP equipment in various versions, for manual loading and fully automatic loading cassette to cassette. Several polishing stations can be combined in one unit. 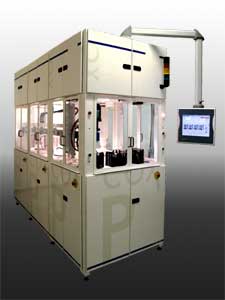 Beside flatness of course also cleanliness is very important for bonding but also for the preparation of the deposition of layers. Wet etching equipment can be used again for this application.